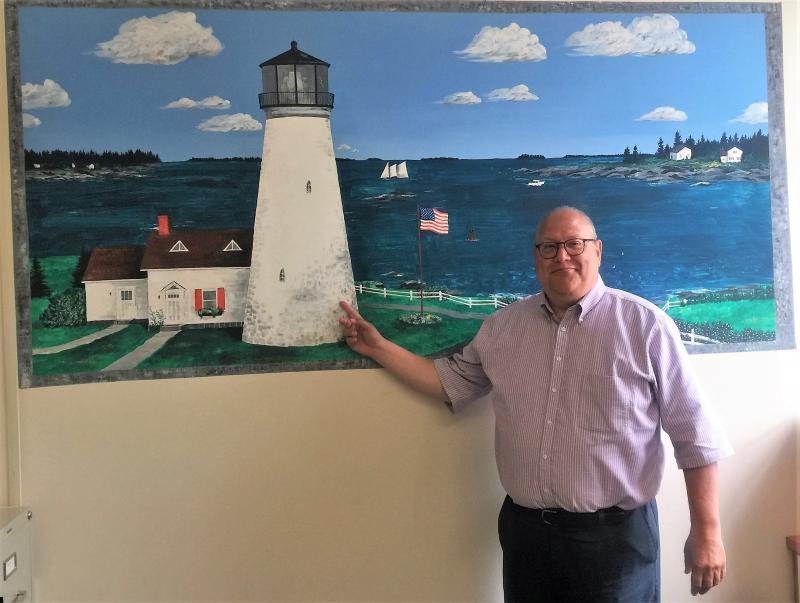 He’s been a sumo wrestler and a turkey, has publicly kissed a newborn pig and has been known to sit patiently awaiting the next bout of chicanery from Boothbay Region Elementary School students. Principal Mark Tess is now retired after 25 years there.

Silly string, whipped cream pies, shaving cream and slime were never obstacles for the man who said he will miss the students, staff and building more than anyone can know.

“I'm a pretty straight arrow in life, but this job has given me the opportunity to be foolish in a good way …”

Before beginning his 17-year tenure as principal, Tess worked for four years as the school's librarian and then four years as assistant principal under then-Principal Eileen King.

Tess was born and raised Burlington, Wisconsin about a 40-minute drive from his alma mater, Carthage College, where he majored in social studies. After college, Tess joined the U.S. Coast Guard and was stationed in Boothbay Harbor.

“I eventually ran into who would end up being my wife, and when I got out of the Coast Guard, I came back here and got married,” said Tess.

Tess said he worked locally for a bit before going back to school for a year at Clarion University, an hour and a half north of Pittsburgh, Pennsylvania. He returned to Maine with a master of science degree in library and information science with an undergraduate degree in history.

His first job was as a librarian at Fort Kent Community High School where he and his wife, Teresa, spent two years – just long enough to earn initial experience in education and learn northern Maine winters were just not for them.

After their last school year in Fort Kent, Tess learned of an opening for a librarian at BRES. The late Alice Fossett was retiring. Tess applied, interviewed and got the job.

“After two winters up there, my wife told me to 'Get another job. I am not coming back,’” Tess recalled.

Tess said one of the things that stuck with him throughout his career is, because he felt he was rather inexperienced, he also felt he was given a big chance. So one of the best parts about his job as a principal has been paying it forward to future educators looking for their first jobs.

“Somebody once told me that the happiest days as a principal were your first day and your last day ... The thing I've always told people is I'm an ordinary person, but I was smart enough to surround myself with extraordinary people and if we've accomplished anything, it's because of them. I've worked with great people over the years.”

“Somebody gave me a chance one time and I feel like I have a professional responsibility. I'm always going to hire the best person for the job because my ultimate responsibility is to make sure these kids are safe and get a good education, but it's just wonderful when you can give a new person a job, their first professional job and then they turn out great. There's nothing that beats that feeling.”

“I’ll have to get back to you on that,” Tess said after a long pause while considering his most cherished moments over the years. “There are just so many.”

However, one of the standouts for Tess was Sept. 11, 2001. As for most Americans, that day for him was one of the more poignant ones, not just for the fear and dread, but for the oneness of the staff and success in helping students and families feel safe.

Tess said his pride comes from the relationships he has built with staff, students and families throughout the years.

Bringing such a large staff together as a family is no easy feat, but Tess said whoever ends up with his job needs to carve their own path, create their own traditions and focus only on the decisions that will benefit BRES students.

“I've never felt that the center of attention should be around me. I've always felt that it's what the children of this community produce – that's what it should always be about. I'm going to miss it. There's no question about it, but I also know that it's time for somebody new with new ideas and I'm very much at peace with the decision.”

Not one to pass up an opportunity, Tess said it is high time to reconnect with family in Wisconsin which he plans to do this summer, and as a lifelong Green Bay Packers fan, he would like to see his first home game while visiting America’s Dairyland. He also plans to do a lot of fishing.

Said Tess, “I'm not typically someone who likes having nothing to do, so when September-October rolls around, I'll be looking for something to do, I just don't know what that's going to be yet.”

Thank you to the Boothbay Register for writing this article.